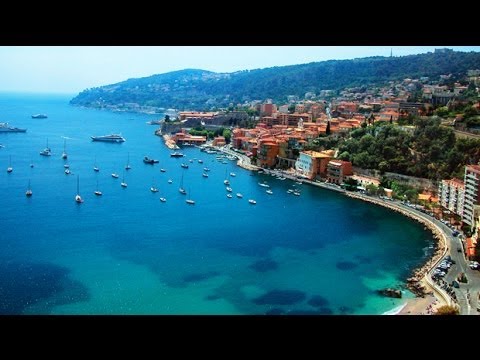 The French Riviera (known in French as the Côte d’Azur) is the Mediterranean coastline of the southeast corner of France. There is no official boundary, but it is usually considered to extend from Toulon, Le Lavandou or Saint-Tropez in the west to Menton at the France–Italy border in the east. The coast is entirely within the Provence-Alpes-Côte d’Azur region of France. The French Riviera benefits from 310 to 330 days of sunshine per year, 115 kilometres (71 miles) of coastline and beaches, 18 golf courses, 14 ski resorts and 3,000 restaurants.

French Riviera has 46 coastal municipalities from west to east.

Learn about 10 Must Visit, Bucket List Places on the French Riviera in this Video Travel Guide by Ryan Shirley

Riviera is an Italian word that originates from the ancient Ligurian territory of Italy, wedged between the Var and Magra rivers. The Côte d’Azur (coast of azure) is a nickname given by France to the County of Nice after its annexation in 1860, because the climate was similar to that of the north of Italy, even in winter, with a sky as blue as its sea. The Actual Name Côte d’Azur was given to the coast by the writer Stéphen Liégeard in his book, La Côte d’azur, published in December 1887.

After the 2000s, the French Riviera was extended to the rest of Southern France, although the geography, culture, and climate are different. This coastline was one of the first modern resort areas. It began as a winter health resort for the British upper class at the end of the 18th century. With the arrival of the railway in the mid-19th century, it became the playground and vacation spot of British, Russian, and other aristocrats, such as Queen Victoria, Tsar Alexander II and King Edward VII, when he was Prince of Wales.

Our romantic journey begins in the city of Cannes in the south of France, along the ‘Blue Coast’, the Côte D`Azur. For most of the time, this impressive section of the Mediterranean coast enjoys a mild climate and is synonymous with a luxurious lifestyle beneath the southern sun.

Le Suquet, the old town that is located above the old port has, in spite of tourism, managed to retain its air of calm sophistication.

The markets in the old town offer an abundance of eye-catching vegetables, fruit and fresh fish. Narrow and picturesque alleys lead up to the tiny mountain of Mont Chevalier on which the historical area of the city is situated.

Close by is the Cap D`Antibes with its mighty castle that from 1386 was owned by the Grimaldis and in the 16th century became a French possession. A huge defensive wall built by the Sun King‘s master fortress builder surrounds the old town and protects its seaward side.

Nice is the ‘dream coast’s’ fascinating and colourful city located on the curve of Angel Bay, a metropolis that has lost little of its turn of the century charm.

The magnificent Promenade Des Anglais, named after the resort’s former large contingent of English visitors, was built during the19th century. The historical centre of the city, Vielle Ville, has become the home of Arabian immigrants, thus couscous features prominently on the menu.

The old fish market is the most beautiful on the entire Côte D`Azur and its traditional displays of seafood are a feast to the eye.

In the centre of the Côte D`Azur’s enchanting landscape is the picturesque medieval village of Eze. Most of the village that can be seen today had its origins in the 10th century and its fine old buildings, charming back streets and archways are real architectural gems.

Only a little further along the coast is the Principality of Monaco which, after the Vatican, is the smallest yet most unique sovereign state in the world.

Luxury yachts anchor in the harbour throughout the year and travel from all over the globe to visit this much sought after tax haven and exclusive casino paradise. Romance, history, luxury, glamour, prosperity and sunshine: the Côte D`Azur!

Officially, the French Riviera is home to 163 nationalities with 83,962 foreign residents, although estimates of the number of non-French nationals living in the area are often much higher. Its largest city is Nice, which has a population of 340,017 as of 2017. The city is the centre of a métropole, Nice-Côte d’Azur, bringing together 49 communes and more than 540,000 inhabitants and 943,000 in the urban area. The French Riviera has a total population of more than two million. It is home to a high tech and science park in north of Antibe and a research and technology centre at the University of Nice Sophia Antipolis. The region has 35,000 students, of whom 25 percent are working towards a Doctorate Degree.

The Cannes Film Festival was launched in September 1946, marking the return of French cinema to world screens. The Festival Palace was built in 1949 on the site of the old Cercle Nautique, where the Prince of Wales had met his mistresses in the late 19th century. The release of the French film Et Dieu… créa la femme (And God Created Woman) in November 1956 was a major event for the Riviera, making an international star of Brigitte Bardot, and making an international tourist destination of Saint-Tropez, particularly for the new class of wealthy international travellers called the jet set. The marriage of American film actress Grace Kelly to Prince Rainier of Monaco on 18 April 1956, attracted world attention once again. It was viewed on television by 30 million people.

The Best Sights & Attractions in French...