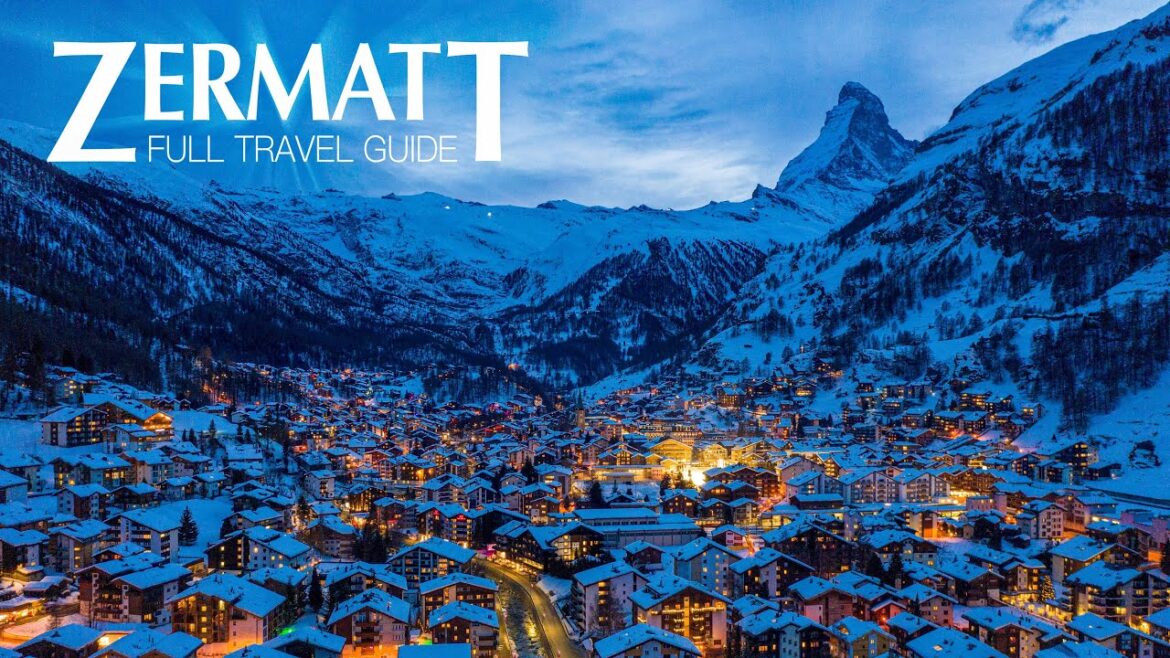 Public Facts and Information about Zermatt

Zermatt is a municipality in the district of Visp in the German-speaking section of the canton of Valais in Switzerland. It has a year-round population of about 5,800 and is classified as a town by the Swiss Federal Statistical Office (FSO). It lies at the upper end of Mattertal at an elevation of 1,620 m, at the foot of Switzerland’s highest peaks. It lies about 10 km (6.2 mi) from the over 3,292 m (10,801 ft) high Theodul Pass bordering Italy.

The Popularity of Zermatt

Zermatt is the Southernmost commune of the German Sprachraum. Zermatt is famed as a Mountaineering and Ski Resort of the Swiss Alps. Until the mid-19th century, it was predominantly an agricultural community; the first and tragic ascent of the Matterhorn in 1865 was followed by a rush on the mountains surrounding the village, leading to the construction of many tourist facilities.

Population and Economy of Zermatt

The year-round population (as of December 2020) is 5,820, though there may be several times as many tourists in Zermatt at any one time. Much of the local economy is based on tourism, with about half of the jobs in town in hotels or restaurants and just under half of all apartments are vacation apartments. Just over one-third of the permanent population was born in the town, while another third moved to Zermatt from outside Switzerland.

Zermatt is Globally Famed for Skiing

Zermatt is known throughout the world for its Skiing especially Triftji for its moguls. The high altitude results in consistent skiing continuously throughout the summer. Skiing in Zermatt is split up into four areas: Sunnegga, Gornergrat, Klein Matterhorn and Schwarzsee. There is also a connection to Cervinia and Valtournenche in Italy through the Plateau Rosa glacier.

Most visitors reach Zermatt by the rack-assisted railway train from the nearby town of Täsch (Zermatt shuttle). Trains also depart for Zermatt from farther down the valley at Visp and Brig, which are on the main Swiss rail network. The town also has a heliport and a local helicopter operator, Air Zermatt, which also provides alpine rescue services.

The Sunnegga Paradise is accessed via the Sunnegga Express funicular railway, followed by a gondola to Blauherd and finally a cable car onwards to the Rothorn (3,103 m) above. The topography of the mountain and the valley tends to keep the Rothorn clear and sunny, even when Zermatt is submerged in cloud. From Blauherd there is a gondola down to Gant, and from there a connecting cablecar goes to Hohtälli. This cable car and the newer 4-seat chairlift Sunnegga-Findeln-Breitboden provide connections between Sunnegga and Gornergrat. With few steep slopes, this mountain is often used to train younger skiers.

The Gornergrat is served by the Gornergrat railway, a 29-minute ride to the Gornergrat peak (3,089 m), via Riffelalp, Rotenboden and Riffelberg, (with limited stops at Findelbach and Landtunnel just above Zermatt). At the summit, the hotel and restaurant have been refurbished and accommodate a shopping centre. Riffelalp station is linked to Riffelalp Resort by a short tramway line named Riffelalptram.

A cable car heads up from Hohtälli to the Rote Nase (3,247 m). This final lift serves a freeride area but can be unreliable as this mountainside requires good snow cover to be skiable. The lifts in this area generally open for the season in late February or early March – cablecar is now permanently closed, with no replacement lift planned. A new slope leading back from Hohtälli to Kellensee just under the Gornergrat replaced this lift to maintain the link from the Rothorn to Gornergrat.

Learn About 23 Best Things to Do in Zermatt, Switzerland in 3 Days in this Video Travel Guide by Planet D

Topics Covered in this Video Guide Include the Below (with TimeStamps)

Near the southern end of Zermatt, the Matterhorn Express gondola transports passengers up to the interchange station at Furi. From here there is access to Schwarzsee via a gondola to the right, a cable car that leads on to the Trockener Steg midstation (and then on to the Klein Matterhorn); and a new gondola, opened on 18 December 2006, links Furi to Riffelberg on the Gornergrat mountain. This lift addresses one of the most persistent criticisms of Zermatt: that it is very difficult to ski the two sides of the valley without a tiresome trek through Zermatt between the Gornergratbahn and the Matterhorn Express at opposite ends of the town.

Testa Grigia at the top of the Theodul Pass serves as a connection to the Italian ski-resorts of Cervinia and Valtournenche. From the Swiss side it is reachable by skilift only, but from the Italian side by a chairlift and by a cablecar. In March 2019 it was announced that a new lift – the ‘Alpine Crossing’ – will connect Testa Grigia and Klein Matterhorn from spring 2021. There are customs offices here as well as a small alpine museum.

Zermatt is marketed as an all-year skiing resort, with summer skiing limited to the Theodul Glacier behind the Klein Matterhorn. Whilst strictly true, during the off season in May and June there will tend to be only one or two runs open, and the main glacier area does not open until July. In operation since 25 October 2003, the Furggsattel six-seater chairlift has twelve (of eighteen) masts that stand directly on the glacial ice of the Theodul Glacier – a first for Switzerland.The new CHF52 million 3S Glacier Ride Cable Car from the resort to Klein Matterhorn was opened on 29 September 2018. It has an uplift capacity of 2000 people per hour and takes just 9 minutes to reach the top using 25 cabins, each with 28 seats

Best Things to Do in Zermatt During Winters

Zermatt is the place to seek amazing panoramic views up in the Swiss Alps. One of the world’s most famous peaks can be spotted in here: The iconic MATTERHORN. Zermatt is a very pretty village, in particular during winter, it’s touristy, but for a good reason! There are a lot of things one can do up there! The probably most-known panorama you could get at the Gornergrat. You may get up there by taking a train that costs around 110.- CHF for return. Up there, you will get to see the Matterhorn from the side. Other very important things to see are the massive Gorner glacier, Dufourspitze (Monte Rosa) and the Kleinmatterhorn.

A notably cheaper peak to visit – and my personal favorite panorama – would be the Rothorn. You would need to take an underground funicular, followed by 2 cabin rides. Up on the Rothorn, you get a brilliant frontal view over the Matterhorn; in my opinion the best view! Surely during Winter, the panorama up there looks stunning! Visit also the village of Zermatt. It charms with its many traditional wooden houses that are stereotypical for the canton of Valais / Wallis. There is a section at where you will get to see many of them, which is located at the “Hinterdorfstrasse”. This is a great place to take memorable photos. Also walk along the river Vispa, from there you get a nice bottom view over the Matterhorn, beautiful to take photos with the village in the foreground.

The main road called Bahnhofstrasse is the touristy centre of Zermatt. It can be crowded but it sort of feels lovely! There are many restaurants at where you can dine at. The village is in particular nice during the sunset and dusk. During December/January/February/March, the village transforms into a perfect Winter Wonderland during the night! Also visit the Kleinmatterhorn, the highest alpine station you could visit in the Swiss Alps and even in Europe! The Kleinmatterhorn is located on 3890m above sea level. Thus, it is already very high up! You will feel the thin air, but somehow it’s also quite exciting! Visit the ice palace (Matterhorn Glacier Paradise), which is a manmade cave inside the glacier. There, you can see many carved ice figures.

The Best 30 Places in the Alps – A Travel Guide

24 Best things to do in Zermatt, Switzerland

The Beauty of French Alps & the Food...

The Beauty of French Alps & the...