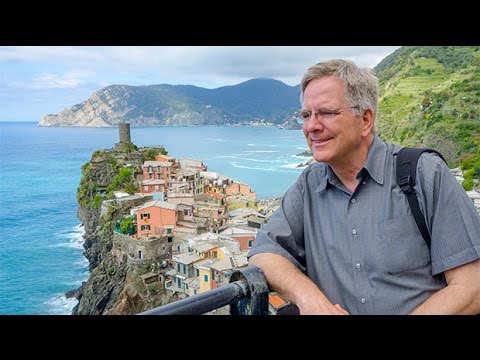 This Post consists of Popular Travel Video Guides by Travellers & Relevant Open Public Historical Information and Facts about Cinque Terre to provide all Information in One Place (References: Wiki, Youtube & Others)

The Cinque Terre (meaning “Five Lands”) is a coastal area within Liguria, in the northwest of Italy. It lies in the west of La Spezia Province, and comprises five villages: Monterosso al Mare, Vernazza, Corniglia, Manarola, and Riomaggiore. The coastline, the five villages, and the surrounding hillsides are all part of the Cinque Terre National Park, a UNESCO World Heritage Site. The Cinque Terre area is a popular tourist destination.

Over the centuries, people have built terraces on the rugged, steep landscape right up to the cliffs that overlook the Ligurian Sea. Paths, trains, and boats connect the villages as cars can only reach them with great difficulty from the outside via narrow and precarious mountain roads.

Historically, Cinque Terre is mentioned in documents dating to the 11th century. Monterosso and Vernazza were settled first and the other villages grew later, whilst within the territory of the Republic of Genoa. In the 16th century, the inhabitants reinforced existing forts and built new defence towers to defend the area from attacks by the Turks.

Cinque Terre experienced an economic decline from the 17th to 19th centuries, recovering when an arsenal was built in La Spezia and it gained a railway link to Genoa. The railway led to migration from the area and a decline in traditional industries until the growth of tourism from the 1970s onwards brought some prosperity. The predominant crops in the area have been grapes and olives. Some fisherman were based in Monterosso, but the area’s gaily painted fisherman’s cottages were conceived in the late 1970s as a tourist attraction.

The Foodies’ Guide to Best Fish and Chips in London