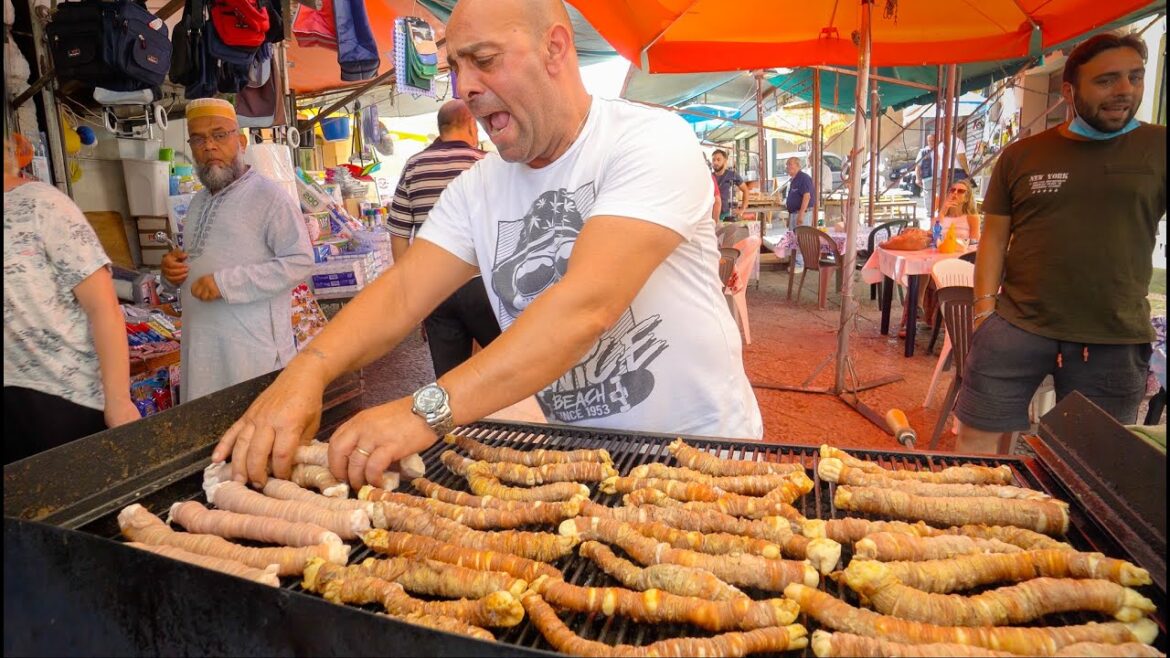 Sicily is a massive island in the south of Italy, the largest island in the Mediterranean! Our first stop on our journey across this culturally rich island is the capital city, Palermo! The ancient city of Palermo is home to some amazing and unique foods.

We start the day with Granita with a Brioche, a very typical Sicilian breakfast. We highly recommend trying the “Granita di caffe e panna” which is Coffee and Panna, and the “Granita ai frutti di bosco” which is a mixed berry with panna. The brioche was light and fluffy!

Next, we venture into the Ballàro Market, the crowded and chaotic market in the heart of Palermo. We got to see all of the in-season produce from the agriculturally-rich Sicilian countryside. We also stopped at a street food stall serving all kinds of Sicilian street foods. We wanted to try their massive arancini, deep fried rice balls that are stuffed with ragu. This snack was so big, it could be considered a whole meal!

We still had more food in Palermo that we wanted to try, so we made our way to the Vucciria Market. We found a local bakery to pick up Sfincione, which is Sicilian pizza. What makes it different from other Italian pizza is the use of Sicilian ingredients like anchovies, strong cheese, onions and herbs. It’s also served on a rectangular crust. We sat down the market’s bar to eat the Sfincione and enjoy it with a glass of Italian beer.

Before taking an afternoon siesta, we had one more street food to try. We went to ‘Nni Franco U’Vastiddaru for the famous Pani câ meusa. This is a veal spleen and lung sandwich, served street side. There was also cheese topped on the offal. The texture was good but unfortunately, the sandwich lacked any flavours.

In the evening, we wanted to have a full Sicilian spread for dinner. We went to the traditional Osteria Al Ferro Di Cavallo. Their menu is full of Sicilian specialties, and we managed to pick out some dishes we wanted to try. We ordered “Pasta Sarde e finocchietto” (Sardine & Fennel pasta), “Pasta alla Norma” (Sicilian Pasta with eggplant, marinara, and basil), “Involtino di Carne” (Meat Roll), “Insalata Sicilian” (Sicilian Salad), the most amazing Cannolo for dessert and their house wine to drink.

Did you know Palermo, Sicily has the best Italian street food in the world? Neither did we! Follow along as we take you on a delicious Sicilian street food tour through Palermo’s best street markets while also hitting the best things to do in this energetic city.

At the Mercato del Capo, we eat the BEST ARANCINI we had in Italy, plus the famous Sfincione and other fried treats. Then, we head out for some sightseeing including the Cattedrale di Palermo and taking in the incredible views of Palermo on the top of the Chiesa del Santissimo Salvatore.

After working up another appetite, we head to the Mercato di Ballarò where we try more arancini, but this time with fried crocchè, which were so tasty and crunchy! We then check out the Piazza Quattro Canti on our way to try our last savory dish – the pane e panelle (or chickpea fritter sandwich).

Next, we stop for an aperitivo where we enjoy a cheeky Aperol Spritz! Then, to top it all off, we end at an Italian pasticceria for two famous Sicilian desserts – the cannolo siciliana and the cassata siciliana. These Italian desserts are so good you won’t want to miss them!

The Best Street Food Dishes to Eat in...

Everything You Need to Know before You...