The All in One Complete Travel Guide for Aegina, Greece 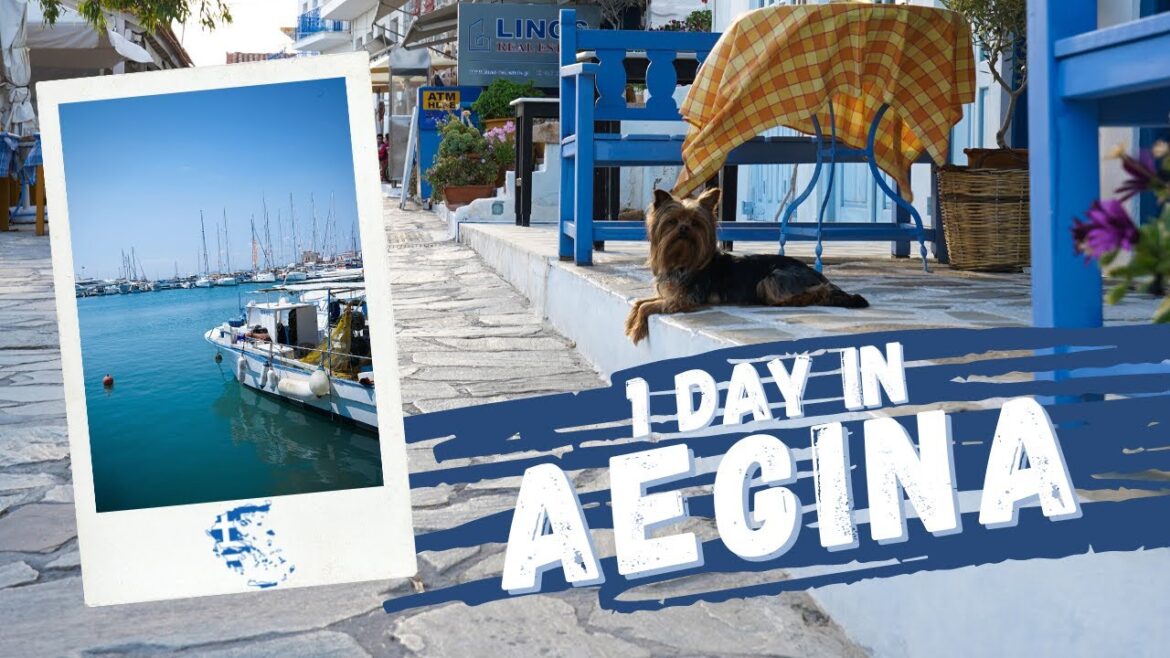 Aegina is one of the Saronic Islands of Greece in the Saronic Gulf, 27 km from Athens. Tradition derives the name from Aegina, the mother of the hero Aeacus, who was born on the island and became its king.Aegina is roughly triangular in shape, approximately 15 km from east to west and 10 km from north to south, with an area of 87.41 km^2

An extinct volcano constitutes two-thirds of Aegina. The northern and western sides consist of stony but fertile plains, which are well cultivated and produce luxuriant crops of grain, with some cotton, vines, almonds, olives and figs, but the most characteristic crop of Aegina today is pistachio. Economically, the sponge fisheries are of notable importance. The southern volcanic part of the island is rugged and mountainous, and largely barren. Its highest rise is the conical Mount Oros (531 m) in the south, and the Panhellenian ridge stretches northward with narrow fertile valleys on either side.

The island of Aegina in Greece might just be the most underrated of them all! Whether you’re here for a couple hours or a day this video will give you a great idea of what it’s like to tour this incredible island and what you can do and see while you visit! P.S. renting a moped is an absolute must!

The beaches are also a popular tourist attraction. Hydrofoil ferries from Piraeus take only forty minutes to reach Aegina; the regular ferry takes about an hour, with ticket prices for adults within the 4–15 euro range. There are regular bus services from Aegina town to destinations throughout the island such as Agia Marina. Portes is a fishing village on the east coast.

Temple of Aphaea, dedicated to its namesake, a goddess who was later associated with Athena; the temple was part of a pre-Christian, equilateral holy triangle of temples including the Athenian Parthenon and the temple of Poseidon at Sounion.

Monastery of Agios Nectarios dedicated to Nectarios of Aegina, a recent saint of the Greek Orthodox Church. A statue in the principal square commemorates Ioannis Kapodistrias (1776–1831), the first administrator of free modern Greece.

3. The Orphanage of Kapodistrias

The Orphanage of Kapodistrias is a large building, known locally as The Prison (Οι Φυλακές, Oi Filakes), constructed in 1828-29 by Ioannis Kapodistrias as a home for children orphaned as a result of the Greek War of Independence. The building also housed schools, vocational workshops, the National Public Library, the National Archaeological Museum, a military academy, the National Printing Office and the National Conservatory for Choir and Orchestra. From about 1880 it was used as a prison, and housed political prisoners during the Greek Junta (1967-1974), hence its local name. There are currently plans to restore the building as a museum.

The Tower of Markellos was probably built during the second Venetian occupation, 1687–1714, as a watch tower in anticipation of a Turkish siege. A castle, fortified walls and numerous watchtowers were built at this time. The tower was abandoned after the Turkish occupation of 1714, until revolutionary leader Spyros Markellos bought the tower as his residence in around 1802. In 1826-28 it was the headquarters of the temporary government of the embryonic Greek state. It subsequently was used as a police headquarters and housed various government agencies until it was abandoned again in the mid 19th century. It is currently owned by the Municipality of Aegina.

Temple of Zeus Hellanios, near the village of Pachia Rachi, is a 13th-century Byzantine church, built on the ruins of the ancient temple to Zeus Hellanios, built in the 4th century BC. The staircase leading up to the church, some of the original walls, and loose stones from the earlier temple remain.

Economy of Aegina & the Connection with Pistachios

In 1896, the physician Nikolaos Peroglou introduced the systematic cultivation of pistachios, which soon became popular among the inhabitants of the island. By 1950, pistachio cultivation had significantly displaced the rest of the agricultural activity due to its high profitability but also due to the phylloxera that threatened the vineyards that time. As a result, in the early 60s, the first pistachio peeling factory was established in the Plakakia area by Grigorios Konidaris.

The quality of “Fistiki Aeginis” (Aegina Pistachios), a name that was established as a product of Protected Designation of Origin (PDO) in 1996, is considered internationally excellent and superior to several foreign varieties, due to the special climatic conditions of the island (drought) as well as soil’s volcanic characteristics.

Pistachios have made Aegina famous all over the world. Today, half of the pistachio growers are members of the Agricultural Cooperative of Aegina’s Pistachio Producers. It is estimated that pistachio cultivation covers 29,000 acres of the island while the total production reaches 2,700 tons per year. In recent years, in mid-September, the Pistachio Festival has been organized every year under the name “Fistiki Fest”

Discover the Island of Aegina- A Video Guide by Best Documentary

In Greek mythology, Aegina was a daughter of the river god Asopus and the nymph Metope. She bore at least two children: Menoetius by Actor, and Aeacus by the god Zeus. When Zeus abducted Aegina, he took her to Oenone, an island close to Attica. Here, Aegina gave birth to Aeacus, who would later become king of Oenone; thenceforth, the island’s name was Aegina.

Aegina was the gathering place of Myrmidons; in Aegina they gathered and trained. Zeus needed an elite army and at first thought that Aegina, which at the time did not have any villagers, was a good place. So he changed some ants (Ancient Greek: Μυρμύγια, Myrmigia) into warriors who had six hands and wore black armour. Later, the Myrmidons, commanded by Achilles, were known as the most fearsome fighting unit in Greece.

5 Best Things to Do on the Greek Island, Hydra

The Best Places to Visit on the Croatian Coast