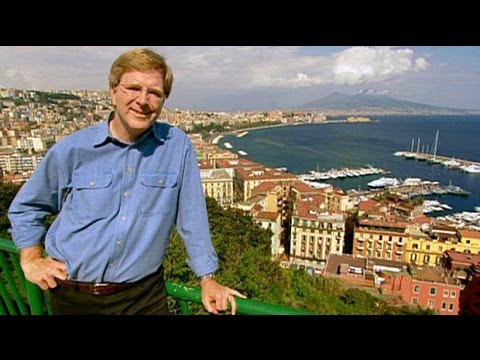 Naples is the regional capital of Campania and the third-largest city of Italy, after Rome and Milan, with a population of 967,069 within the city’s administrative limits as of 2017. Its province-level municipality is the third-most populous metropolitan city in Italy with a population of 3,115,320 residents, and its metropolitan area stretches beyond the boundaries of the city wall for approximately 20 miles.

Naples was Founded by Greeks

Founded by Greeks in the first millennium BC, Naples is one of the oldest continuously inhabited urban areas in the world. In the eighth century BC, a colony known as Parthenope (Ancient Greek: Παρθενόπη) was established on the Pizzofalcone hill. In the sixth century BC, it was refounded as Neápolis. The city was an important part of Magna Graecia, played a major role in the merging of Greek and Roman society, and was a significant cultural centre under the Romans.

In gritty Naples, we go shopping Neapolitan style, dodge scooters in Naples’ crazy traffic, explore the city’s vibrant neighborhoods, admire exquisite ancient mosaics at the National Museum of Archaeology, taste pizza in its birthplace, climb the lip of Mount Vesuvius, and wander the amazing ruins of the Roman town it destroyed: Pompeii.

The city has long been a global point of reference for classical music and opera through the Neapolitan School. Between 1925 and 1936, Naples was expanded and upgraded by Benito Mussolini’s government. During the later years of World War II, it sustained severe damage from Allied bombing as they invaded the peninsula. The city received extensive post-1945 reconstruction work.

Since the late 20th century, Naples has had significant economic growth, helped by the construction of the Centro Direzionale business district and an advanced transportation network, which includes the Alta Velocità high-speed rail link to Rome and Salerno and an expanded subway network. Naples is the third-largest urban economy in Italy by GDP, after Milan and Rome.

Napoli is the capital of Campania in southern Italy where hustle and bustle combines with serenity and joie de vivre. The Centro Storico Monumentale is located around the harbour and the Piazza Del Plebiscito embodies both grandeur and vastness, in contrast to the narrow confines of the old town. Close to the harbour is the mighty Castel Nuovo, its graceful entrance arch seemingly hemmed-in by two awkward-looking towers.

Its construction began during the reign of Charles The First but Alfons Of Aragon subsequently had the castle completely rebuilt. From the centre of the town a small causeway leads to the tiny island of Borgo Santa Lucia. The island is dominated by a building which in ancient times was the residence of Lucullus, namely the Castel Dell´Ovo, the oldest fortress in Naples. The Via Partenope, with its magnificent buildings and luxury hotels on the coast near Santa Lucia, developed by land reclamation in the nineteenth century.

A walk along the Caracciolo coastal road towards Mergellina passes the Parco Communale with palm trees, sculptures and fountains. Measuring four square kilometres, Procida is the smallest island off Naples, densely populated and with a long history and the picturesque Marina Grande at the Cattolocio Ferry Port typifies relaxed island life. Ischia, the island of Titan Tiphoios, is the largest of the three islands in the Gulf Of Naples, each one now being a very popular tourist destination. “A piece of heaven that fell to Earth”, that is how the Neapolitans rightly refer to their beautiful city and its surroundings.

The Port of Naples & Historic City Centre of Naples

The Port of Naples is one of the most important in Europe. In addition to commercial activities, it is home to the Allied Joint Force Command Naples, the NATO body that oversees North Africa, the Sahel, and the Middle East. Naples’ historic city centre is the largest in Europe and has been designated as a UNESCO World Heritage Site. A wide range of culturally and historically significant sites are nearby, including the Palace of Caserta and the Roman ruins of Pompeii and Herculaneum. Naples is also known for its natural beauties, such as Posillipo, Phlegraean Fields, Nisida and Vesuvius.

Neapolitan Cuisine & the Birthplace of Pizza

Neapolitan Cuisine is noted for its association with pizza, which originated in the city, as well as numerous other local dishes. Restaurants in the Naples’ area have earned the most stars from the Michelin Guide of any Italian province. Naples’ Centro Direzionale was built in 1994 as the first grouping of skyscrapers in Italy, remaining the only such grouping in Italy until 2009.

Naples’ 2,800-year history has left it with a wealth of historical buildings and monuments, from medieval castles to classical ruins, and a wide range of culturally and historically significant sites nearby, including the Palace of Caserta and the Roman ruins of Pompeii and Herculaneum. In 2017 the BBC defined Naples as «the Italian city with too much history to handle». The most prominent forms of architecture visible in present-day Naples are the Medieval, Renaissance and Baroque styles. Naples has a total of 448 historical churches (1000 in total), making it one of the most Catholic cities in the world in terms of the number of places of worship. In 1995, the historic centre of Naples was listed by UNESCO as a World Heritage Site, a United Nations programme which aims to catalogue and conserve sites of outstanding cultural or natural importance to the common heritage of mankind.

“For lovers of antiquity, the National Museum of Archaeology by itself makes Naples a worthwhile stop. The city’s one essential museum visit offers the best possible peek into the art of Pompeii.”- Rick Steves’ Europe

“Naples is one of the most ancient cities in Europe, whose contemporary urban fabric preserves the elements of its long and eventful history. The rectangular grid layout of the ancient Greek foundation of Neapolis is still discernible. It has indeed continued to provide the layout for the present-day Historic Centre of Naples, one of the major Mediterranean port cities. From the Middle Ages to the 18th century, Naples was a focal point in terms of art and architecture, expressed in its ancient forts, the royal ensembles such as the Royal Palace of 1600, and the palaces and churches sponsored by the noble families.” – UNESCO

Did you know these 50 Facts about Naples, Italy? In this video we will learn about the Culture of the Metropolitan city of Naples in Campania, Italy. Naples is one of the main cities in the Campanian region and therefore, would probably contain the most notable facts of the Neapolitan region due to Its cultural history in comparison to the other towns and cities within the region. We will discover their unique style, street food, architecture, art, religion, entertainment, celebrities, music and dance, geography, economy, language and of course, the general facts and trivia.

Best Things To Do & Places to Visit in Naples

The Ultimate Street Food in Naples – A Foodies’ Guide

Everything You Need to Know Before You Travel...

Best Things To Do & Places to Visit...

Everything You Need to Know Before You...

Naples’ Culture, People & Pizza from the...

The Ultimate Street Food in Naples –...