Best Things to Do & Places to Visit in San Gimignano 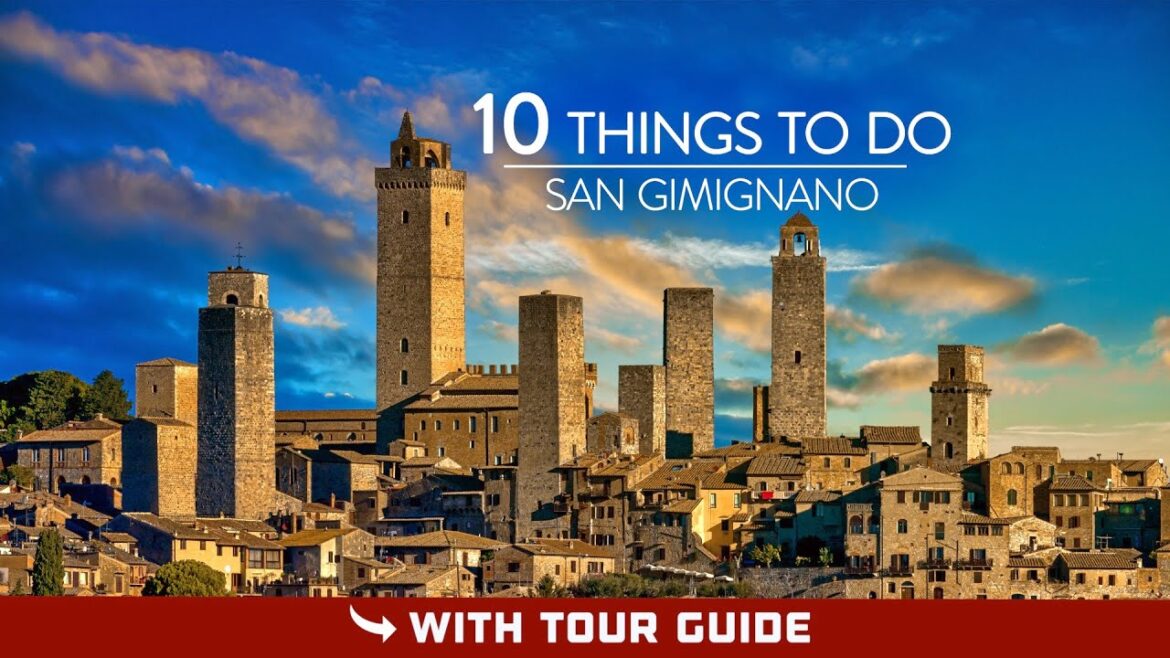 This Post consists of Popular Travel Video Guides by Travellers & Relevant Public Historical Information and Facts about San Gimignano, Public Transport from Florence to San Gimignano to provide all Information in One Place

What To Do in San Gimignano:

0:20 / 10. SAFFRON: It is not an obvious one, but you will find it on the menu of all the restaurants in town. Saffron is a very expensive spice that gives a yellow-orange coloring to foods that is still produced here. Without Saffron, there would be no San Gimignano as we know it. Saffron brought great wealth to the city, and it financed the tower building. It has repeatedly saved San Gimignano because it was used as currency to pay off debts incurred during the wars.

0:55 / 9. San Gimignano 1300: a museum, artwork and experience. Here you can find recreated scenes of medieval street life and find out why most of the towers collapsed. The main attraction is an impressive 27 square meters or 290 square feet model of the city from 1300 made of hand painted clay.

1:45 / 8. CAMPATELLI HOUSE & TOWER: There used to be 72 ancient towers and only 14 have survived to today. This 28-metre high tower house belonged to Campatelli family. They left this house to the public and inside you can learn about 1,000-year history of San Gimignano and see how the families lived.

2:37 / 7. GELATO: one of the most delicious landmarks in the history of landmarks! To call it an ice cream would be a big understatement. This is more like art. And when you add this fantastic main square with towers …. I think no other gelato experience can compete with this one. They even have medals and plaques claiming the best gelato in the world. Actually I can see two world best gelato places. So if you are not sure which one is the best, you should try both. I recommend local flavours like saffron or Vernaccia.

4:13 / 6. ROCCA OF MONTESTAFFOLI: the top of the tower that was part of the fortress built by the Florentines in 13 hundred. At the time the town submitted to Florence to protect it from Siena and internal riots. Florentines built a massive fortress to house its soldiers. And this tower is almost all that is left. Today this is hilltop park that offers best free of charge views over the skyline.

4: 54 / 5. CITY WALLS & GATES: You can walk along the perimeter of the 13th-century city walls. The walk is about 2.1 kilometer or 1,3 miles, passing massive portals and enjoying splendid views.

5:37 / 4. SANT’AGOSTINO: plain looking brick church was built in 13 century. But looks can be deceiving. The interior is hiding amazing 15th-century frescoes, showing 19 scenes from the life of Saint Augustine, from his boyhood in North Africa to his death. For art lovers, this is one of the most important things to see in San Gimignano.

6:35 / 3. PALAZZZO DEL POPOLO & TOWER: 13 century town hall famous for its tower, known as the Fat Tower. It is the tallest in town at 54 meters. When wealthy families in San Gimignano looked for ways to protect themselves they started to build tower houses. Tower building soon turned into a competition. The rivalry finally stopped when the local council passed a law that no tower was to be taller than this one. The town hall houses The Civic Museum, Art Gallery and offers access to the top of its tower.

7:45 / 2. SANTA MARIA ASSUNTA: simple looking Roman Catholic church is the main church in town. It was consecrated in 1148 in the presence of Pope himself. On the outside, it doesn’t look particularly impressive, but on the inside it is spectacular. Walls are covered with some of the most outstanding frescos from the 14th century. There are whole cycles of different scenes that are telling stories from the Bible. And they also store relics of Sant Geminianus, the patron of the town.

9:13 / 1. PIAZZA DELLA CISTERNA: 13 century square is surrounded by towers and it is the heart of San Gimignano. It served as a market place, stage for festivals, tournament and all major events. The square got its name after big underground cistern, that lies under this square and was used to provide drinking water for the city. That is why in the middle of the square sits this stone well. All around you can find shops and cafes where you can sit down and admire the view.

“San Gimignano, with its distinctive skyline, stands like a medieval mirage on its hilltop. With walls built in the 13th century and 12 surviving towers, what was once a stop for pilgrims en route to Rome is now a popular tourist destination. ” – Rick Steves’ Europe

Surrounded by a double wall that dates back to medieval times and amid the gentle undulating hills of Tuscany is the town of San Gimignano with its striking 15 towers that were built by competing aristocratic families. The towers were considered to be of great prestige and also provided a means of defence.Competition to construct the tallest tower became increasingly fierce until a special decree curtailed the mindless indulgence of the local aristocracy.

The town’s prosperity came to a sudden end and in 1348 the plague killed thousands of its inhabitants. Located next to the cathedral, the Palazzo Del Comune contains numerous works of art. Since it was built at the end of the 13th century it has been extended many times. Frescos adorned with several of the town’s historic symbols decorate the walls of a tranquil inner courtyard.

The 14th century was a prosperous time for many of the townsfolk. At a height of 54 metres, even today the Communal Palace’s Torre Grossa rises above each one of the town’s further towers. For several centuries San Gimignano’s towers have been a prominent part of the town’s noble silhouette amid the captivating landscape of Tuscany.

Arrival in San Gimignano Via Bus

Arrival in San Gimignano by a Combination of Train and Bus

The Medieval Town of San Gimignano &...